Don’t judge a guidebook by its cover: but should you judge it by its brand? 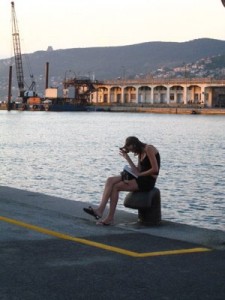 Yesterday I provided some tips on how to choose a guidebook, my advice being don’t judge a guidebook by its cover, judge it by its author, just as you would any other book.

The way I see it, if you’re buying a novel (compelling story aside) you’re buying the book based on the author’s talent, skills, reputation and body of work. You’re not buying the book based on the publisher. You don’t think: “Ooohhh, HarperCollins published that book, I just have to read it!” Because HarperCollins or Picador or Random House or whatever probably publish an equal amount of successes as they do flops (by the way, that’s a random statement to prove a point. I haven’t checked that, so don’t quote me on it).

So when I was answering Eric Daams’ excellent question about identifying good guidebooks, in response to our Brilliant Minds post, it never occurred to me to mention the brand. And yet the brand plays a role in your purchasing decisions. Right? Mark of Travel Wonders of the World wrote: “If you want to decide on a travel guide book, go down to the local library and select a few… Decide which matches your views/tastes/ideas/values and you have a good chance of choosing a brand which most suits your travelling style. As Lara points out, guidebooks do vary a little in quality by author, but in general they write in a similar style and are typically targetted to a specific audience (backpackers, well-heeled, adventurous, inexperienced, etc). I have my couple of favourite brands like most people that most suit my approach to travel.”

But let’s say I suggested that you decide on your guidebook ‘brand’ first (then the author), you need to decide which brand you identify with. Are you a Lonely Planet, DK, Rough Guides or Footprint reader? And what does that mean? The way I used to look at it when I was younger, Lonely Planet was for 20-something backpackers on frugal budgets; Rough Guides were for slightly older (30-something), more educated (explained by the ‘Contexts’ chapter) independent travellers; DK was for more discerning travellers with more money; and Footprint were for more adventurous and more intrepid folk. But is that really how things are?

The more I travelled and the more involved I became in guidebook publishing, the more complex I realized things were. Older travellers also carried Lonely Planets. Younger travellers also carried DK. And once we started working for publishers, another layer of complexity was added. Our Lonely Planet editors made it clear their audience was much wider than we’d thought. My DK editors said their readers were interested in quality budget places as much as top end options. So if the audiences for these books was wide in terms of age and spending power, how was a brand’s readers’ classified?

Was it, as Mark suggests, more to do with views, tastes, ideas and values? Well, views and tastes were never a topic of conversation with our editors. Yet ideas and values were. Lonely Planet sees its readers, just for starters, as humanists, as environmentally conscious, and politically aware. But then so do Rough Guides. (Just take a look at their Contexts chapters). And DK? Well, they’re owned by the same company as Rough Guides. And Footprints? I’d say they’re the same.

So if the audiences for these books have similar values and ideas – according to each of their publishers – what about their tastes? But hang on a minute, taste is reflected in the choices made as to what to include in the book. Which restaurants and hotels to put in and which to leave out, which shops to add and which should stay out. These decisions are made by the author, not by the editors or company staff. So, what does taste have to do with the brand?

Once again, it boils down to the content of the book. And the producer of the content is the author. Not the brand. What do you think? I think it’s time for a poll.