Burj Khalifa and How Bridges, Buildings and other Big Things Unite Nations 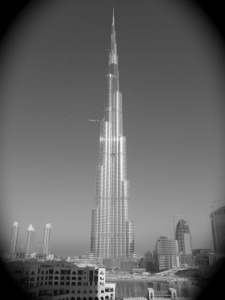 I’m a fan of Twitter but I was on deadline and only half-following tweets a few nights ago as messages streamed in from people in the UAE at the inauguration of the world’s tallest building Burj Dubai, since renamed Burj Khalifa. A few made me giggle, like that of @OmaReina who re-tweeted @trebbye:”#BurjDubai is now Burj Abu Dhabi…I mean #BurjKhalifa, as stated by his highness”, a reference to more affluent neighbouring emirate Abu Dhabi’s financial bailout of its debt-ridden cousin Dubai. (For further explanation, see this piece by Dubai’s Financial Times writer Simeon Kerr).

While there were the usual expressions of cynicism from Dubai’s many critics (some very witty), I was drawn more to tweets by Emirati and expat tweeps for their raw emotion and passionate expressions of elation and pride. As the messages streamed in at a rapid pace by tweeps determined to see the symbolic structure become a trending topic on Twitter, I have to admit I got a tad emotional and wished I was there with friends. You see, although I’m Australian I moved with husband Terence to the UAE in 1998 to work, and while we’re permanently on the road now, the country is still our base. I’ve lived there a quarter of my life and feel more home there than in Australia where I have to admit I feel, well, um… foreign. So when twitter pal and Matador editor Julie Schwietert (@collazoprojects) tweeted: “You know what I don’t care about? The Burj, that’s what.” I felt compelled to respond. Not criticize. Just explain that “The people who care about the Burj are the people who live there & love the place, and for whom it’s symbolic of so much…” (and, cause I needed more characters) “…which is why I care about it; I think we must feel the way Aussies felt when the Opera House or Harbour Bridge opened.” Because that’s what I’d been thinking as I half-watched the tweeps coming in that evening.

As I read tweets about workers injured during the construction of Burj Dubai, I recalled reading many years earlier in a popular culture class at uni about the many men who had died, were injured or went deaf while working on the Sydney Harbour Bridge, an initiative that created a phenomenal debt that wasn’t paid off until the 1980s. I also remembered old black and white photos I’d seen of the opening ceremony, presided over by the state premier, with a 21-gun salute, Air Force fly-past, marching bands and decorated floats, all considered very extravagant during times of depression. Sydney’s bridge is now a major tourist attraction, the Bridge Climb considered a must-do activity for visitors, and a place of celebration, with Sydneysiders streaming over it for its anniversaries and other significant events. The bridge is the centrepiece for every New Year’s Eve fireworks, when the country anxiously waits to see (after weeks of speculation) what illuminated symbol will appear on the structure following the dazzling display – it was a disco ball one year, a dove of peace another.

But, more than anything, like the Sydney Opera House and other great iconic monuments, the Sydney Harbour Bridge is a source of immense national pride. Its completion not only united the city when it connected Sydney’s northern and southern shores in 1932, but it also united a nation during very challenging times. I suspect Burj Khalifa has done the same.

P.S.my tweets motivated this lovely post from Julie on Matador: How Twitter Helped Me Care About the Burj.