Are You Ever Too Old For…Youth Hostels? 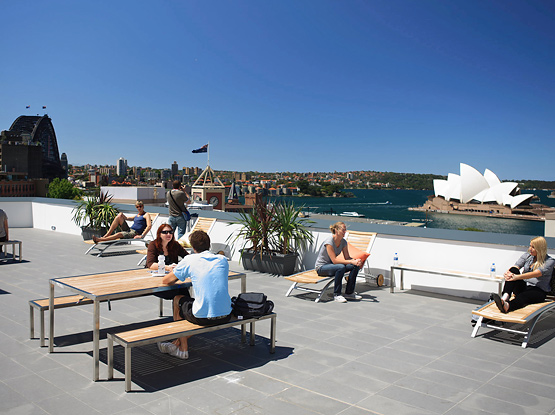 Australia has become a very expensive destination for foreign travellers who aren’t earning the high incomes that Aussies are currently earning. Hotels, flights, public transport, restaurant meals, and entry fees are all considerably more expensive in Australian capitals like Melbourne, Sydney and Perth than they are in cities traditionally considered high-cost destinations like London, New York and Paris.

If Terence and I aren’t required to try hotels for stories we’re doing, we will always stay in an apartment rental when we have a choice and when it makes sense (i.e. if we’re in a city for more than three days), however, for the first time in many years, in Australia, I’ve actually found myself considering hostels for overnight stays.

Now, don’t think I’m a snob for no longer staying in hostels. It’s not that. When I backpacked in my twenties, that’s where I mostly stayed. However, I’m 40-something now, I’m married, and Terence and I don’t particularly enjoy sitting around and singing along to someone badly strumming Wonderwall. And 99% of the time when we’re travelling it’s for work. As a writer, I need a quiet space to work, I need to plug in my laptop and spread out my research materials. Terence does the same, but has a gazillion drives that need to be plugged in. We can’t do that in a hostel. Or can we?

I inspected a handful of flashpacker-type hostels last year in Bangkok when we were researching a new guidebook to the city and was surprised to see how far hostels have come in a few years. Some could even be called stylish, with funky colour schemes and murals by local artists decorating the walls. Some boasted rooms with Wi-Fi, iPod docking stations and small flat screen televisions, not just a wall lined with old PCs and a TV lounge.

But what impressed me most was that the best hostels had single, twin and double rooms with en-suite bathrooms, and often the dorm rooms were on a completely different floor or section of the building. And once again, don’t get me wrong, I’m not a snob, but surely you all remember the backpackers who stumble in from a night out at 4am (um, sorry, that was me), and those that wake up at the crack of dawn to catch an early bus or flight, but before they do spend an hour rustling plastic bags. What was it with that? Payback for people like me?

So in Australia, for the first time in many years I found myself browsing sites like Hostelworld.com (the one that came most recommended by backpacker friends on Twitter – it seems to be the Trip Advisor for backpacker accommodation) and comparing the prices of hostels in cities like Sydney to that of hotels – and, out of curiosity, comparing the price of hostels in Sydney to those in foreign destinations like New York. Ouch. The prices were indeed comparable.

And I found myself wondering whether we were too old to stay in a hostel, could we find one of those fancy flashpacker places like the kind I’d seen in Bangkok with double rooms with bathrooms, and would it be possible to actually find a place that wasn’t party central where we could actually get some work done…

What I really wanted to know, for myself as much as for the stories we’d be writing on Australia, was whether hostels were a viable budget accommodation option for married couples, older people, and even business travellers. Then, coincidentally, the YHA contacted me to see if we wanted to try their YHA at The Rocks, Sydney. Here was my chance!

Much to our surprise, there were not only quiet private double rooms with ensuite bathrooms with linen, towels and tea and coffee making facilities (all of the things you take for granted in hotels), they were in a separate part of the building to the dorms. They were also half the price – and probably in a lot better condition and cleaner – than any budget accommodation in the city, plus the rooms also had Sydney harbour and Opera House views. And there were even better views from the rooftop terrace. You would probably pay $200 for the same views from other city hotels, although admittedly not with the same comforts.

Could we work? Yes. There was Internet in the room – pre-paid log-in cards could be purchased from the front desk – and a desk to work at. Unfortunately there wasn’t enough room for both of us to sit at, and this is one reason we’ll always choose an apartment over a hotel or hostel when we can so we can both sprawl out at the dining table, but it would be just fine for a single business traveller.

Would I stay in a hostel again and would I recommend hostel stays to travellers like us – married couples – and for older folks and business travellers? Absolutely, in expensive destinations like Sydney – and probably New York – but I’d recommend doing some research first and, if you can’t find the information you want online, asking some questions.

Things to consider if contemplating a hostel stay:

Are you a traveller who has out-grown your backpacking party years but still use hostels? Would you recommend them? Only in expensive destinations or for other places to? Any tips to add?

This site uses Akismet to reduce spam. Learn how your comment data is processed.